Who Keeps the Family Pet in a California Divorce? 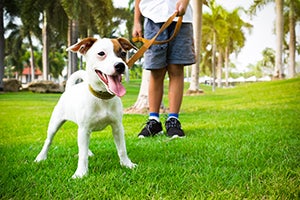 Divorce is a difficult experience for everyone, including the family pets. Many consider their pets like their own kids, but they don't receive the same treatment as children in a divorce. Instead, pets are normally considered personal property. Deciding who gets possession of the pets after a divorce is finalized has to be worked out in property division negotiations.

Divorcing spouses are always encouraged to figure out themselves how to divide community property and marital assets during a divorce. However, when it comes to property that is very personal, such as family pets, it's difficult to make a decision. Often, California family law courts have to get involved and help them. There have been cases where one spouse who is angry over the divorce will fight to keep the family pet out of spite. This means the pet won't end up in the best home where they will receive proper care. Let's review the new pet custody law below. Contact our Los Angeles divorce lawyers for more information.

Determining Pet Custody as of January 2019

Throughout the long legal history of divorce in California, pets have been treated as property to be divided. This is a difficult standard for many pet lovers who form emotional attachments. Recognizing these challenges, California lawmakers have passed a new law under Family Code Section 2605.  It allows judges to consider the well-being of an animal when making pet custody decisions in a divorce. As of January 1, 2019, pets have special status during the divorce process.

This new law is a game-changer. While pets are still considered property, a  judge has the authority to say where the pets will live after the divorce is final. The factors the judge will use is actually similar to the factors used in deciding in child custody. Now, under this new law, pets will be treated more like a family member and less like property. This article from our divorce and family law lawyers will describe California's new pet custody laws.

If you or a loved one is going through a divorce, you have legal rights which enable you to protect your four-legged friends. Our experienced Los Angeles divorce and family law attorneys can help protect your rights to visitation and decision-making for pets.

According to NBC News, the bill was signed into law by Governor Jerry Brown. A pet owner whose Borgie, Lucy, is the state's First Dog, and whose Bordoodle, Cali, is the state's First Deputy Dog. The law is not limited to cats or dogs. It covers any animal that is community property and “kept as a household pet.” Family court judges can consider the “care of the animal” and create joint custody arrangements between two divorcing spouses.

The new law recognizes that pets are not the same as personal property, and cannot be treated as such. One legal commentator noted a case in which the court ordered a dog to be sold, and the profits split between the divorcing couple. This horrifying outcome shows the danger of treating a pet like a piece of personal property. Pets already have special rights recognized at law. (A person could not, for example, be arrested for cruelty toward a lamp or table.) It, therefore, seems only right that they should be appropriately accounted for in a divorce.

When spouses can't come to an agreement, the court will intervene. Under the new law, a judge will have the authority to consider factors in order to find a solution that serves the best interests of the spouses and pets.

The specific factors a judge will use in order to determine who will get the family pet after a divorce will be decided by finding answers to specific questions, such as:

The answers to these specific questions will typically determine which spouse is a better fit to take care of the family pet once the divorce is finalized.

What Does This Mean for Divorcing Pet Owners in California?

The new bill creates a midpoint between the treatment of personal property (which accounted for subjectively based upon its documented value) and children (who are subject to a detailed analysis of “the best interest of the children”) in California divorce law.

Indeed, similar laws in other states have included a “best interests of the pet” standard. The California bill does not include such language, but it does allow courts to give special consideration to the care of a pet in dividing community property.

In some cases, the divorcing spouses are able to agree to provisions for the visitation and care of a pet. If these agreements are submitted to the court, they can become court orders that are enforceable against a noncompliant spouse. If the spouses cannot agree – or if a “joint custody” situation is not feasible – the parties can ask the court to determine the care arrangements.

As with child custody, the court can enter temporary arrangements that stay in place until the final orders are issued at the end of the divorce. And also like child custody, the judge can award care of the pet to either spouse solely or joint care by both spouses on a set schedule.

As stated, In making such orders, the judge may also consider which spouse has been the caretaker in the past, which spouse is better able to care for the pet in the future, which spouse plays with and feeds the pet, and other similar considerations that bear upon the best interests of that pet.

As a result, divorce litigants have the opportunity to prove to a judge that sole care of the pet should be awarded due to the other party's neglect of a pet's needs. Litigants also have the opportunity to work together to arrange for the care of a pet and allocate visitation to both spouses. For many pets, this is the best possible future with two owners to whom they are equally attached.

Skilled Representation For Your Rights as a Pet Owner

With all the complicated issues presented by divorce, it can be easy to overlook arrangements for pets. But for many couples, the pets are among the most emotional of all divorce issues to resolve. Our skilled California divorce and family law attorneys have extensive experience in both negotiating custody arrangements and presenting a strong case to the court when a couple cannot agree. Call (818) 528-3471 to schedule your free consultation. We will help protect your rights as a pet owner to help ease the painful transition of a divorce.