What Is a Protective Order in a California Divorce?

Under the best circumstances, divorce is complicated and trying. If your divorce involves a protective order against your spouse, the situation is even more difficult. Having an order of protection filed during a California divorce can severely complicate an already sensitive matter and places the spouse who is the target of the order at a disadvantage. 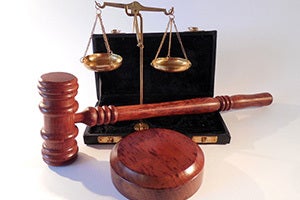 Protective orders allow the court to specifically define what is considered acceptable contact between spouses, often including children. It's important to note protective orders are frequently issued on the most minimal of accusations. A protective order (also known as a restraining order) is a legal mechanism for restraining an allegedly abusive party from coming into contact with their spouse for a specified length of time.

Such protective orders can be emergency orders or standard protective orders, and they are designed to protect a divorcing person who is reasonably believed to be in danger of spousal harm. If you are going through a divorce that leaves you in fear, you need the experienced legal counsel of a compassionate California divorce attorney.

Our Los Angeles based divorce and family law firm can help you with the process.

Process of Obtaining a Protective Order in Los Angeles

A protective order can be requested in the actual divorce case in the Los Angeles County Family Court or in a separate court. The first step is for a spouse to appear before a judge and tell them why they believe a protective order is necessary. The spouse who is the target does not have to provide any input to the judge.

Based on the information received, the judge will determine whether the request is denied, or if a “temporary” protection order should be issued. It should be noted a request for a temporary order are rarely denied, even in cases where little evidence is provided to support the claims.

The court will then schedule a hearing where the spouse will need to return on the temporary protection order to determine whether it should be made permanent. At this hearing, both spouses will be present, but will have limited time to give their side of the story.

Purpose of a California Protective Order

The purpose of protective orders is to prevent one spouse from suffering serious emotional or physical harm from the other. As stated above, it's common for protective orders to be issued against a spouse on very minimal evidence.

The most common reasonable factors for seeking a protective order include physical conflicts, such as domestic violence. Another factor is violent behavior that is not necessarily directed at a spouse, such as punching or kicking walls, or throwing items during an emotional conflict. Factors also include inappropriate emotional conduct in front of the children.

Finally, another major factor includes behavior by one spouse that makes it unsafe for them to be with their kids, such as drug or alcohol use, exposure to unstable people, or threats to commit suicide.

A protective order is designed to keep hostile spouses separated and safe from harm. This means that actual implementation of the order can result in a spouse being immediately removed for their home and away from the children without any ability to return.

If a police officer assesses that there is reason to believe that you and/or your children are in danger of being harmed by your spouse, the court can issue an emergency protective order that prevents your spouse from coming within a stated distance of you for a stated length of time (typically a three-year maximum).

Protective orders are issued by the court, within its discretion, on a showing of good cause that you and/or your children need protection from your divorcing spouse. Such an order can enjoin your spouse from engaging in a wide variety of abuses:

The reach of a protective order is expansive, and it can play an important role in the divorce process.

A Protective Order and Your California Divorce

The standard grounds for a California divorce are no fault, which means that divorces are based upon irreconcilable differences and not on the fault of either party. This is even true when one spouse has been accused of domestic violence.

This does not, however, mean that your spouse's violent, threatening, and/or abusive behavior will play no part in your divorce or its outcome.

Working closely with a Los Angeles family law attorney will help ensure that you and your children's safety remains paramount and will aggressively advocate for the most positive resolution of your case.

In order to finalize your divorce, specific matters have to be negotiated. The most important among these are naturally child custody arrangements (always the top priority in divorces involving children), the division of marital property, and financial issues that can include child support and spousal support.

The least expensive, time-consuming, and anxiety-producing path forward is typically when both spouses negotiate terms together. If you have a protective order against your spouse, however, it naturally makes negotiations difficult – if not impossible.

While your respective attorneys can negotiate on your behalves, the scepter of domestic violence or abuse often precludes real progress from being made.

If you need to obtain a protective order against your spouse, it is very likely that the court will prohibit him or her from remaining in your family home throughout the divorce process.

In general, both of you have the right to remain in your home until the divorce is finalized – because your home is community property that belongs to both of you. In other words, a protective order can significantly affect you and your children's lives and the trajectory of your case throughout the divorce proceedings.

The dedicated and compassionate legal team at our law firm can help you. We serve clients throughout Southern California, including the greater Los Angeles area, Ventura County, and the San Fernando Valley. Your case and your well being matter, so contact us at 818-528-3471 for a free consultation.