Transmutation Agreements in a California Divorce

In a divorce, one spouse is entitled to one-half of the other spouse's income, assets. A spouse is also responsible for half of the debts incurred during marriage.

The division of property and debts in a divorce can be complex and heated. Depending on the financial state of the couple, this process can be extremely involved. 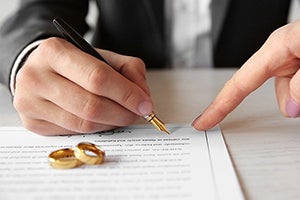 Sometimes having a prenuptial agreement can make the divorce process more manageable, and sometimes it can further complicate matters, such as often is the case with transmutation agreements.

After marriage, spouses can enter into a contract regarding their marital properties and debts. These are called “post-nuptial” agreements, which means after the marriage begins, but before spouses legally separate or divorce.

Under California Family Code 852, a transmutation must be in writing and signed by the negatively impacted spouse.

Although there are many uncertainties in a divorce, one thing you can count on is that hiring an experienced Los Angeles family law attorney will help you have a more favorable outcome in the end.

To give readers more useful information about a transmutation agreement, our California divorce attorneys are providing a detailed review below.

As stated, when it comes to divorce, California is a community property state. This simply means that if the couple decides to divorce, the property they acquired after their legal marriage is considered to belong equally to both spouses, with the exception of gifts and inheritances.

Community property should be equally divided between the spouses in the divorce.  This not only applies to assets but debts as well.

Generally, property owned before the marriage or obtained as a gift or inheritance will belong solely to the spouse who owned it or received it.

Couples who enter a marriage with multiple or high-value assets may choose to execute a prenuptial agreement. With this agreement, they are allowed to ignore the rules of community property and determine for themselves how they will deal with their debts and assets in the event of a divorce.

However, the prenuptial agreement must be fair to each party. Otherwise, a judge can decide not to honor it.

A prenuptial agreement may dictate that each spouse keeps 100 percent of their own income or specific pieces of property they can keep as their own.

What is a Transmutation Agreement?

Couples are also allowed to make similar agreements after they enter into the marriage but before a divorce.

Under the California Family Code, transmutation agreements  are not valid unless:

In addition, the agreement must contain an express declaration. It does not have to use the word transmutation, but it must expressly state that the ownership of the property is changing with the agreement.

If you decide to sign such an agreement, it is wise to have your Los Angeles family law lawyer review it first.

Sometimes transmutation agreements are implied with other transactions. For instance, if one spouse owned a home from a previous marriage and refinanced that home with their new spouse or creates a right of survivorship by transferring the title to include both of their names, a legal transmutation has occurred.

This agreement will be binding in case of divorce and the spouse's property will then be divided according to the agreement.

If the couple should decide to divorce after executing their transmutation agreement, it will be binding in court. Their property will be divided as determined by the agreement and not by California law.

However, either party could challenge the validity of the transmutation agreement on the grounds of one of the following:

If one spouse is successful in challenging the validity of the agreement, it will not be honored by the court. Property and debts will then be settled in accordance with the law.

The division of assets and debts during a divorce proceeding can become heated and burdensome. Some couples try to avoid this with various agreements, which sometimes are not as legally binding as they thought they would be. If you are going to sign a contract, it is wise to have it looked at by an attorney to ensure its enforceability.

Whether you are thinking about crafting a transmutation agreement, your spouse has asked you to sign one, or you have one that needs to be enforced by the court, a family law lawyer in California can help you.

Ready to get legal help with your asset agreements?  Call our divorce lawyers to review the details of your situation. We have a track record of success in all types property division matters.