After a divorce, child custody battles are very common and frequently cause parents to have great concern for the well-being of their children. It's important to note that Los Angeles County family courts won't modify an existing child custody order or create a new one just based on one parent's desire or opinion. Rather, in order for a parent to receive an ex parte or emergency custody change, a parent has to be able to prove a change in custody will serve the child's immediate best interests. 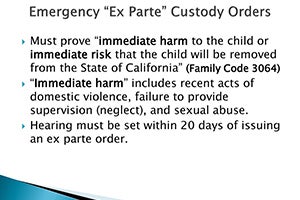 The term ex parte refers to the family courts legal ability to decide at the request and benefit of one parent to the dispute in the absence of the other parent. This means that if the Los Angeles County family court judge believes that in waiting to hear from the other parent in a child custody battle will in some way endanger the child, they can provide ex parte relief.

There are a wide-range of situations that can quality for ex parte relief. These include acts of domestic violence, sexual abuse against the child, removing the child from the state, child neglect, DUI arrest, drug abuse by a parent, careless acts of child endangerment, among other situations. It's important to note that while California laws create legal grounds for relief in these type of situations described above, the family court judge reserves the right to grant ex parte relief in any situation where they believe it will place the child in danger. The key phrase here is “immediate danger.” Just because one parent has poor character or morals and may have committed adultery, this will not typically be considered an emergency.

In Los Angeles County, California, it is possible for a parent to get temporary custody of a child ex parte, meaning without the other parent present or having been served formal notice. Family Courts are often reluctant to issue rulings ex parte because, under normal circumstances, it offends the sense of justice to enter a ruling against someone's interests without that person taking part in the proceeding. Nevertheless, the courts will issue ex parte custody orders if there is an urgent need to do so.

As discussed above, California Family Code Section 3064 makes it clear that the court is only permitted to issue an ex parte child custody order if there is the danger of immediate harm to the child or immediate risk that the child will be removed from the State of California. You must demonstrate to the court that the matter is an emergency and the court must intervene.

If a parent files an ex parte custody application in a Los Angeles County family court to receive an emergency custody order and the judge agrees with the facts that are outlined in the request, they will either create a new child custody order or simply change the existing one. Further, the judge could decide to grant all, some, or even none of the requests in the application. The emergency order essentially serves as a legal temporarily binding order that will remain in effect until an evidentiary hearing occurs.

California Family Code Section describes exactly what information is needed to apply for ex parte orders for child custody or visitation. The following facts have to be included in in an ex parte request. Known as a “Request for Order:”

It can't be overstated that unless one parent can show actual proof their child will suffer immediate harm or that there is a legitimate risk of the child being removed from California, the ex parte request will typically be denied by the Los Angeles County family court judge. Again, if granted, the temporary will stay in place until a hearing, normally within 20 days. Let's take a closer look at the main situations below where an ex parte might be granted. See related: FL 300 Information Sheet for Request for Order.

The Danger of Immediate Harm

If you can demonstrate that your child is in immediate harm and that if the court does not grant you temporary custody of the child the child will be injured, then the court may be willing to grant you temporary custody of the child despite the other parent not knowing or participating in the court hearing. Immediate harm will usually involve domestic violence, which can include physical child abuse, sexual abuse, or severe child neglect.

If you can demonstrate to the court that your child is facing one of these issues at the hands of your child's other parent (or someone living in his or her home), then you may be issued an ex parte temporary child custody order. Keep in mind that your allegations cannot be mere speculation.

The Danger of Removal from the State of California

If your child is in immediate danger of harm or being removed from the state, then you will need a Los Angeles child custody attorney to file an emergency motion for a child custody hearing. If notice can be served twenty-four hours in advance, the hearing is not considered ex parte. If notice is not served twenty-four hours in advance, then the hearing is ex parte and may proceed if your child's safety or welfare is at stake.

If you are seeking custody of your child and may need to do so on an emergency basis to prevent harm of your child or to prevent the child's other parent from leaving the state with your child, then contact our Los Angeles child custody attorneys.

If you sincerely believe your child is in immediate danger or at risk of being taken out of the state of California, contact our law firm at 818-528-3471 to file for a temporary emergency order.