People rarely enter into a marriage expecting to get divorced. 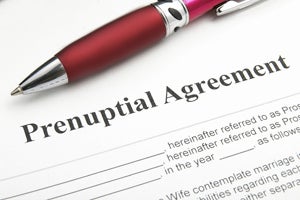 Unfortunately, a significant number of marriages do end in divorce, and there are often many issues that need to be resolved before a divorce can be final, such as questions regarding child custody, the division of community property, spousal support, and child support.

While there are default rules for the way that these and other issues will be resolved, couples who are considering marriage can also enter into a prenuptial agreement, which is a type of contract that supersedes the default rules in many cases and will govern the way that a divorce will be finalized. Below is some basic information about what a prenup can and cannot do.

Property division can be one of the most hotly contested issues in divorce. In cases where there are significant or complex assets on the line, a dispute regarding the way that marital estate will be divided can last for months or even years. You need to know what to include in a California prenuptial agreement.

Under California law, courts use a system often referred to as “community property” in the legal community to divide marital assets. In a community property state, assets that are obtained after a couple has gotten married are divided equally, with certain exceptions.

Importantly, however, these default rules can be superseded by a prenuptial agreement. These agreements can cover a couples present and future property rights and ensure that certain assets do not later become subject to division due to growth or appreciation during the marriage.

Prenuptial agreements are significantly less flexible when it comes to issues related to child support and custody. For example, while a couple could agree to a certain level of child support should the marriage end in divorce, the amount of child support could only provide more than the amount the child would have received by law, not less. Furthermore, a prenuptial agreement cannot limit a court's ability to address issues related to child custody and visitation.

Similarly, there are limitations places on the way that these agreements can affect spousal support. A court will find waivers of unenforceable if the party against whom enforcement of the term is sought was unrepresented by independent counsel at the time the agreement was executed or the provision is unconscionable at the time that enforcement is sought.

Premarital agreements are contracts in which two parties agree about how their personal and future assets will be distributed in the event the marriage is dissolved. Because California is a community property state, all marital assets are automatically owned by the couple 50/50 regardless of traditional notions of ownership.

Accordingly, some couples may wish to keep certain assets purchased during their marriage as “separate property.” Especially because of California's unique status regarding property distribution, premarital agreements can be essential, even if you would not have considered entering one out-of-state.

For example, if you have been saving for a classic car that you plan to buy shortly after your marriage, you may wish to execute a premarital agreement specifying that the car will be your personal property.

This is especially important even for married couples moving to California from a state that follows the common law, which permits separate assets during the marriage. You could include a sunset clause in a California prenuptial agreement, which covers how the agreement ends because it will no longer be necessary after a certain amount of years of marriage.

If you have recently or are planning on moving to the Los Angeles area from out-of-state, be sure to contact a California family law attorney regarding your property rights immediately.

Although prenuptial agreements function as binding contracts, because of the sensitive nature of marriage and marriage dissolution, California law provides certain exceptions to enforceability:

Due to the complexities that may arise during the execution and application of a prenuptial agreement, utilizing an attorney can help to minimize the chance a court might find an agreement unenforceable. See our blog: How To Challenge A Prenuptial Agreement in California and How Should I Ask My Partner for a Prenuptial Agreement?

Hiring an experienced Los Angeles family law attorney is wise if you are preparing to enter into a marriage in a community property state. Even if you are already married, you can still choose to execute a marital contract as a means of protecting the rights you enjoyed in another state. At Furman & Zavatsky LLP, we have the experience you need to assist you with your prenuptial or marital agreements. Contact us today for a free, no risk consultation at 818-528-3471. Serving the greater Los Angeles and San Fernando Valley area.