In Los Angeles County California family law courts, parents have to create a parenting time and visitation plan for their children when they make the decision to separate or divorce. Parents should make every effort to negotiate this type of critical plan themselves before they take the child custody issue in front of the judge. It can't be overstated the importance that parents attempt to make these custody decisions themselves as they will be required to attend mediation if they can't make an agreement on their own. 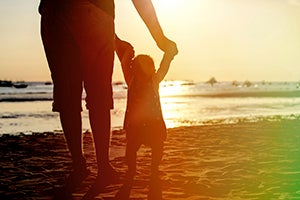 During mediation sessions, a third-party mediator will help the parents communicate with each in an effort to effectively work together to create a plan for sharing time with their kids. In cases where this mediation fails to reach an agreement, then the child custody issue will be litigated by the court.

Whether it's the family court judge or the parents who make the final decisions on the life-altering issue of parenting time with their children, it's critically important that parents have a clear and thorough understanding of the difference between legal custody and physical custody in the state of California.

In the end, decisions will have to be made on both of these types of child custody and the choices made at this stage will have a dramatic impact on the long-term relationship between the parent and their children. Any parent who is requesting full child custody in California has to be prepared to submit convincing evidence to the family court.

Our highly experienced Los Angeles divorce and family law attorneys at Furman & Zavatsky LLP can assist you in creating a parenting and visitation time plan while proving you with important information about the differences between California legal vs. physical custody. Let's take a closer at these terms below and explain exactly what they mean.

What is Legal Custody?

For couples with children, the most important issue to resolve in a divorce will almost always be custody of the children. Child custody is a term that refers to two separate and distinct legal rights as a parent: the right to make legal decisions about the child's welfare (legal custody) and the right to spend time with their child (physical custody).

While it's not required that parents have to always consult with each other before making an important decision, if something goes wrong without consulting with the other parent, there could be adverse custody decisions made by the court.

If a parent is awarded sole legal custody, they will have all the decision making powers.  A family court judge will typically award sole legal custody in situations where one parent has demonstrated they are unfit to make decisions or they are not present their child's life.

What is Physical Custody?

Physical custody authorizes a parent to be a present figure in their child's life. It gives them the right to spend time with them, Children will typically live with the parent who is granted physical custody. If cases where both parents share physical custody, the child could then split time living in each home.

Los Angeles County family courts normally prefer that both parents share joint physical custody of their children. In this way, it's much easier for both parents to stay in constant contact with their kids. In situations of shared joint physical custody, each parent will possess the legal right to be physically present in the life of their children, but it doesn't mean this time has to be split equally.

In most cases, one parent will be the primary custodial parent, meaning the child's living situation is the minimal disruption to their child's life, such as in cases where one parent lives in the desired school district.

However, there are cases where one parent will not be considered fit enough to take care of their children. For example, one parent might live too far way and unable to be a constant presence in their child's life.  Therefore, the family court judge could decide awarding sole physical custody to one parent is in the child's best interest.

If sole physical custody is given to one parent, it doesn't mean the non-custodial parent has no legal rights to spend time with the children. Rather, they could be granted visitation rights that could be supervised or unsupervised, depending on any perceived risks to the child. In most cases, if a parent doesn't have physical custody, they will be ordered to pay child support.

The Unfair History of Child Custody

Despite being a legal issue, the history of child custody in American law has been anything but fair. In earlier times, children were considered the property of a man, and they belonged to him after a divorce. This system was eventually abandoned in favor of one that was equally unfair. After recognizing that children were not property, the law created sexist assumptions about which parent was better suited to care for young children.

This “tender years” doctrine created a legal presumption that mothers were better suited to the care of young children, and should, therefore, be awarded custody in a divorce. After too many years of these unjust assumptions, the law eventually recognized the need to account for each individual child's needs during a custody dispute.

This doctrine became formalized in 1966 when the Supreme Court of Iowa used a “best interest of the child” standard to decide custody of a six-year-old boy. With a simple statement that would shape the next generation of child custody jurisprudence, the Court held: “We have considered all of [the relevant] factors and have concluded that Mark's best interest demands that his custody remain with the Bannisters.”

How the “Best Interests” Standard is Used in California Today

California (like many other American states) has adopted the “best interest of the child” standard by codifying it into statute. Section 3011 of the California Family Code lists many factors for family court judges to consider in determining the best interests of a child. These include the health, safety and welfare of the child; any history of abuse by a parent, relative, caretaker, or romantic partner of a parent; the nature and amount of contact with each parent; and the continued or habitual illegal use of controlled substances.

As you can imagine, some parents have bitter disputes over these highly emotional issues. Many custody battles become factual debates about whether the child was abused, whether a parent is illegal drinking or using drugs, and whether a child is endangered by a parent's behavior. Such allegations can be extremely difficult to prove with any level of certainty. This is why it is so important to have the guidance of a skilled attorney who knows how to obtain evidence of such of such behaviors and make persuasive arguments to a family court judge.

Some couples are able to agree to a schedule of parenting time and joint legal decision-making authority without the assistance of a court. But what happens when parents cannot agree on these important legal parenting rights?

If you are facing a custody dispute, it is important to seek the advice of an experienced Los Angeles child custody attorney. Custody decisions can affect a parent's relationship with their children for the rest of their lives. It can also affect the amount of time a parent is allowed to spend with a child, the amount of child support that parent must pay, and other critical factors that can damage a parent-child relationship that has already been strained by the stress of divorce.

A divorce or legal separation can be an overwhelming experience for anyone – especially those facing child custody disputes. With the representation of an experienced Los Angeles family law attorney, you can be assured that your legal rights as a parent are aggressively protected.

Our attorneys know how to work with parents to create parenting plans that are best for their children. When parents are unable to agree on custody arrangements, our attorneys bring the case to a judge and fight hard for our clients' parenting rights. We fight hard to protect your legal rights as a parent.

Don't leave custody to chance – hire an experienced lawyer who knows how to protect family rights during a difficult time.  Contact our law firm for a free consultation with one of our experienced and aggressive child custody attorneys. We serve clients throughout Los Angeles County from our office in the San Fernando Valley.