California doesn't recognize common law marriage like other states in the country. This essentially means that if you live in Los Angeles County, you will not be considered married in spite of how long you may have lived with another person. It also means in order to enjoy the benefits extended to married couples, you must be legally married. 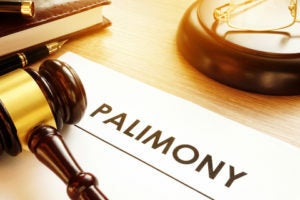 However, California does recognize palimony, which is compensation that one partner of an unmarried couple makes to the other after separation. This is the exception to the rule. Since 1976, California has recognized the legal right of some unmarried couples to receive financial support after their relationship has ended.

The main purpose behind palimony is that long-time couples who live together have become substantially dependent on the other partner's financial support. When the relationship ends, one partner often has an extreme difficulty adjusting their life on their own. Spousal support, commonly known as “alimony,” is often awarded to a spouse after a divorce or separation in order to help them make this difficult transition to single person.

Likewise, palimony can be awarded in some cases to help the now single partner adjust to life on their own. It's important to note that when married couples divorce, they split the property they acquired while married. Again, one spouse might also need to make alimony payments to the other, to help an ex-spouse get back on their feet. But what happens if a couple never actually marries?

This situation is increasingly common. People move in together, split expenses, but never take a trip down the aisle. Nevertheless, even without a marriage certificate, couples become financially intertwined, relying on each other's incomes. When the relationship ends, one partner might see a dramatic and unfair drop in their standard of living. This is where palimony comes in. As stated above, it is like alimony, though ultimately different.

If you were in a relationship with someone and had an agreement to share resources, you might qualify for palimony. Our lawyers will need to closely review the details of your situation in order to determine if you might be eligible to receive palimony. Contact our experienced Los Angeles divorce and family law attorneys for more information. Let's take a closer look at palimony below.

The Origins of Palimony

In an important 1932 case, Trutalli v. Meraviglia, the Supreme Court of California held that non-marital partners could create a contract concerning the property that they acquired while in their relationship. In this particular case, the couple had agreed that all money the man earned would be invested for the benefit of each partner, and each would have a 50% interest in the proceeds. According to the court, this type of agreement was legally enforceable even though the couple was in a romantic relationship.

By most accounts, palimony really took off with the 1976 case of Marvin v. Marvin, where the state's Supreme Court laid out the legal justification for awarding palimony. As the Court saw it, two competent adults could reach an agreement about what they would do with their property. The fact that a couple lived together in a sexual relationship did not change that fact.

Subsequent cases affirmed the Marvin court, extending the rule to both explicit and implicit contracts. However, courts refused to uphold the agreement between partners when teach was still legally married to other spouses.

How Palimony Differs from Alimony

If a couple is married, then each has a right to property based on their status as husband or wife. California's community property laws kick in, and there does not need to be an agreement between the couple to share property jointly. The law creates that requirement.

Things are different with palimony. Here, a partner is not automatically entitled to property or support because of their status as a partner. Instead, there must be an underlying agreement of some sort explaining how the couple will divide its property.

This rule was made clear in a case called Marvin II. Although the trial court found that the couple did not have an express agreement to jointly share property, the judge order that the man pay money to the woman to help her get on her feet after the relationship ended. The Supreme Court reversed, holding that the essence of palimony was the agreement between the couple.

Who Can Receive Palimony?

In Los Angeles County, California, there are a limited number of situations where a family court judge will grant an award of palimony. One is known as a “putative spouse,” meaning palimony could be available if a someone mistakenly believes that they are legally married as long as their mistake was reasonable and in good faith.

How could this happen? Perhaps one spouse defrauded the other or a clerical error prevented their marriage paperwork from being filed properly. If this happens, the court could make a determination the couple lived together with the impression they would share financial obligations and rights. Based on this impression, it would not be fair for one spouse to deny the other the legal rights they believed they enjoyed. Therefore, if one spouse request financial support, the judge could classify them as a putative spouse and grant theme palimony.

Another situation includes contracts and agreements. In some cases, a couple will not believe that they are legally married, but do believe they actually entered into a private agreement with the other to enjoy certain rights typically extended to married couples. Perhaps one person believes there is a mutual understanding that all the property, assets, and income are to be shared between the two partners. This type of understanding could be oral, in writing, or simply implied.

This type of situation often occurs in long-term relationships where the couple lives together and one partner forms the impression that both share in the relationship equally. In some cases, one partner may have made promises to the other they would share equally property, income, and retirement benefits.  After the relationship has come to an end, you can ask the court for financial support based on these promises.

In the situations described above, a Los Angeles County family court judge could decide to order palimony to one partner in the relationship. However, it should be noted the court will typically review each situation on a case-by-case basis in order to determine if there was a oral, written, oral, or implied contract between the two partners. The main factors the court will consider the most important to make their determination on awarding palimony include:

In some cases, the judge could decide an agreement was thought to exist between the two partners because of the amount of time and effort one partner made to support the other.

In effect, palimony is really no different from any other contract dispute. To succeed, you need to show you had a valid contract with someone supported by consideration. However, the consideration cannot be something “meretricious,” in the words of the Courts. Basically, this means you can't use sex as consideration, but agreeing to provide support as a homemaker or housekeeper to someone you have sex with probably does qualify.

Interestingly, there is no requirement that a couple live together, either. Instead, all you need to prove is a validly-enforceable agreement to share property. You can do this with the following evidence:

The agreement must be sufficiently specific so that the judge can identify what you agreed to. Remember, palimony is simply a creation of a contract, not the law, so what the parties agreed to is all that matters. Oral agreements are definitely harder to prove than written agreements, though some people have been successful.

If you had an agreement to share resources with an unmarried partner, then you might be entitled to palimony. The sooner you start gathering evidence, the better your chances of obtaining property or support after your relationship ends.

Our Los Angeles family law and divorce lawyers have worked aggressively to help people land on their feet after the end of a marriage or relationship. For more information about your rights, please schedule a free initial consultation with us. We can review your situation and identify your best path forward. We serve clients throughout Los Angeles County from our San Fernando Valley office. Contact our law firm at 818-528-3471 to review the details of your situation.