What is a Mandatory Divorce Settlement Conference? 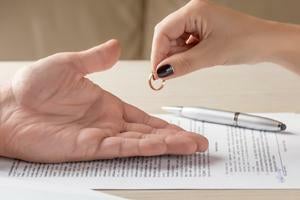 If you are going through a divorce in Los Angeles County, the chances are that your divorce case will not go undisputed. In rare cases divorces are undisputed, meaning that neither party argues about terms of the divorce agreement. This is the simplest, best case scenario, but it almost never happens. Getting a divorce is often a complex process involving a lot of maneuvers.

More often than not, divorces are rife with disagreement over how assets, debts, and property are to be divided and how (and if) custody of children will be shared. When divorce terms are disputed and cannot be agreed upon, the divorce moves towards the trial stage, involving considerable time, money, and potential headaches.

One of the final divorce steps in Los Angeles County is an effort to settle the case. It's called a Mandatory Settlement Conference, commonly known as MSC. As you can see right there in name, a MSC is not optional. Both divorcing spouses and their divorce lawyers are required to attend.

In some cases, the Los Angeles County family court judge will have the conference in a chamber meeting, while others will appoint another person to hold the conference as a temporary settlement judge. Typically, this is another Los Angeles family law lawyer.

The purpose of the Mandatory Settlement Conference is to resolve any issues before the court in order to finalize the divorce settlement, thus avoiding a divorce trial. Obviously, a divorce process is very stressful and will interrupt your daily life. Reaching a fair agreement at the MSC is usually in the best interest of both spouses and their children in order that everyone can move on with their lives.

Clearly, the MSC is in the interest of reducing conflicts and simplifying the divorce process before your case reaches the litigation and trial stage. As stated above, it' important to note the Mandatory Settlement Conference will be ordered prior to the trial date as a means to encourage communication and increase the chances of reaching a settlement amenable to all parties without going to trial.

The MSC is a critical step toward resolving outstanding issues and settling your divorce. Contact the experienced Los Angeles divorce attorneys at Furman & Zavatsky LLP to assist you in navigating the Mandatory Settlement Conference.

The main goal of mandatory settlement cases is to encourage the parties involved to settle their disputes and avoid going to trial. In divorce proceedings, a settlement means that both parties agree to certain terms for how their assets will be divided. In addition, if there are children involved, child custody will certainly be addressed in any settlement agreements.

The benefits of a settlement are numerous. Ideally, settlements provide an environment for all parties involved in the divorce proceedings to have their concerns heard and addressed. In addition, settling out of court means that you and your spouse have some degree of control over the outcome of your divorce.

On the other hand, if you are unable to come to an agreement and settlement, your case will proceed to trial. The judge presiding over your trial will have the final say over the terms of your divorce, including how your assets and property are divided. The judge will also decide how custody of any children will be handled.

How to Prepare for Your Mandatory Settlement Conference

All parties involved in the mandatory settlement conference are required to prepare written statements, called briefs, describing the facts and details of their case. Your brief should introduce your situation and give some background on your case. Any temporary orders currently in effect should be discussed. If there have been other previous attempts at a settlement, these should be outlined in the written statement. In essence, every detail of your divorce case needs to be outlined in the brief, including any requests for attorney's fees, restraining orders, custody, and spousal support or alimony.

Usually, lawyers will prepare these briefs, but if one or either party is representing themselves, they may prepare their own statements. Everyone involved, including both spouses, their legal representation, and the judge or mediator, must be served with a copy of each party's brief to review prior to the Mandatory Settlement Conference. Because of the significant issues that are often at stake, it is highly advisable to retain an experienced attorney to represent you at your settlement conference.

Even when all the issues can't be resolved in the conference, it's still an important step to resolve as many as possible. However, the goal is to resolve all the issues in order for a settlement agreement to be written at the Most Mandatory Settlement Conference and both parties sign the agreement. If this happens, it will be submitted to the judge and they will enter it in as a final order. It should be noted that even in cases where all the issues are not resolved in the conference, it's still important to have a written documentation of the unresolved issues.

Again, it is not required that both parties agree on all of the terms of the divorce in order to avoid trial; you can agree on certain points and then decide to allow a judge to rule on the remaining issues under dispute.

Settlement conferences work best when the parties involved hire legal counsel to guide them through the process. If you're going through a divorce in Los Angeles, consider attempting to resolve any disputes in your divorce proceedings by reaching a settlement agreement before your case reaches trial.

Choosing a divorce lawyer familiar with the Mandatory Settlement Conference process can help simplify your divorce as a whole, and can ideally help avoid the need to go to trial. The Los Angeles divorce and family law attorneys at Furman & Zavatsky are experienced and familiar with the complexities of divorce proceedings from start to finish. To discuss the details of your case, call us at 818-528-3471.