How to Get an Annulment of Marriage in Los Angeles County

Ending a marriage is a major life decision with far-reaching ramifications for everyone involved. The process can be long and trying and is often emotionally draining. Despite these challenges, it's critical to act carefully and deliberately to ensure the best outcome at each step along the way. 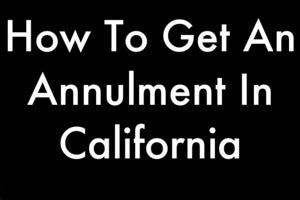 If you are seeking to end a marriage in Los Angeles County, divorce is one option, but it is also worth considering whether an annulment might be the best means to end the marriage. A divorce is the legal dissolution of a marriage that effectively ends a valid marriage and returns both spouses back to a legal status of being single with the option of get remarried later.

Once the divorce process has been completed, it's still legally recognized the marriage did exist but was ended because of irreconcilable differences. So, what is the difference between annulment and divorce?

In legal terms, an annulment cancels a marriage as if it never even happened. The Los Angeles County Family Law Court will not recognize your were ever married and will consider the marriage invalid. Clearly, seeking an annulment is a major decision. It doesn't have the same effects as a divorce because an annulment is essentially erasing a marriage from your history.

Again, it's important to note an annulment in California is seen as the marriage never even happened. It also means you won't have the legal right to request child support from your spouse. Our Los Angeles divorce and family law attorneys at Furman & Zavatsky LLP highly recommend that before you decide to seek an annulment, you need to understand the consequences of your decision. If you need help with attorney fees in a annulment proceedings, California Family Code § 2030 allows you to ask the judge to divide the expenses of the litigation.

If you need assistance with obtaining information about the annulment process in California or need a Los Angeles divorce and family attorney to represent you at the annulment hearing, contact our law firm in order for us to closely review the details of your situation.

Our divorce lawyers represent clients throughout Los Angeles County and the San Fernando Valley. Now that we have covered a general overview of an annulment, let's take a deeper look below.

What is an Annulment of Marriage?

There are three primary ways to terminate a marriage or registered domestic partnership in the state of California. The first method is by divorce (which may or may not involve a summary dissolution of marriage), the second is by legal separation, and the third is by annulment. The California Judicial Branch provides extensive information on its website about all of these means to ending a marriage.

An annulment differs from divorce and legal separation in that it means your marriage was never legally valid. An annulment may also be referred to as a nullity of marriage or a nullity of domestic partnership.

Legal Reasons for an Annulment of Marriage

Certain types of relationships are automatically illegal and grounds for annulment. A marriage is never considered valid in California if either of the following is true:

In addition, other marriages and legal partnerships can be declared legally invalid and annulled for any of the following reasons:

Is there a Statute of Limitations for Requesting an Annulment of Marriage?

Unlike divorces and legal separations, which do not have a deadline or time limit, there is a statute of limitations for requesting an annulment. This means that you must act to request the annulment within a specific window of time or you will be unable to end the marriage by annulment.

The statute of limitations for annulments varies depending on the reason for which you are requesting the annulment. Read on for a breakdown of how long you have to request an annulment for each type of situation:

Steps to Getting an Annulment of Marriage in Los Angeles County

You have to file your request for annulment with the Los Angeles County family law court before the statute of limitations for an annulment runs out. As stated above, the time limit will differ depending on the situation.

Just like a divorce, you have to file the proper documents with the court before it will consider approving your annulment request. The actual petition for annulment will include some background information about your marriage, the reason you are seeking an annulment, and the specific terms you are asking the court's final decision to include.

If you want the family law court to grant approval for a divorce in case they don't approve your request for an annulment, you will need to check both boxes on the form “nullity” and “dissolution” and then write “alternative” next to the dissolution box.

You will also need to complete the summons in order to legally notify your spouse of the annulment petition within 30 days of the filing. Your spouse will have 30 days from the date they received the summons to respond.

You have to obtain an uncontested proceeding, whether it's due to an agreement with your spouse on the summons or a default judgment. Both you and your spouse have to attend a court hearing regarding your annulment request. If your annulment request is valid and you provided the proper documentation, the Los Angeles County family law court judge will grant the annulment and you will be provided an official order.

Contact Our Los Angeles Divorce Attorneys to Discuss Your Annulment

Annulments are rare and complicated cases, and it can be extremely difficult to prove to a judge that your case warrants an annulment. Hiring legal counsel is a good choice for anyone considering ending a marriage or domestic partnership.

The Los Angeles divorce attorneys at Furman & Zavatsky are experienced and familiar with the complexities of annulments. To discuss the details of your case, call us at 818-528-3471.