How to Fight a California Ex Parte Child Custody Order

Child custody battles frequently have parents concerned for the well being of their children.  California family law courts won't modify an existing child custody order or create a new one just because of a parent's opinion. In order to be granted an ex parte or emergency custody change, a parent will need to prove the change in custody will serve the child's immediate best interests. Ex parte relief depends on stipulations described in California Family Code Section 3064. 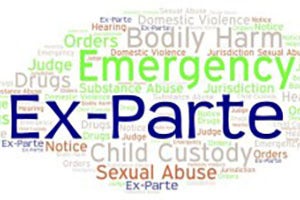 Los Angeles family law courts are prohibited from granting or modifying custody an ex parte basis unless they see actual evidence of imminent harm to the child, or there is a valid risk somebody will remove the child from the state. The term ex parte refers to the family courts ability to decide at the request and benefit of one party in the dispute.

If your ex-spouse (or divorcing spouse) has obtained an emergency child custody order – or ex parte order – and you have lost custody or visitation as a result, you are obviously going through a very stressful ordeal.

The first and most important step to take in such a situation is to retain the professional legal counsel of an experienced Los Angeles family law attorney.

Your children's well-being and your ongoing relationship with them is obviously your primary concern, and these things are far too important to leave to chance.

If a parent files an ex parte custody application for an emergency custody order and the courts decides they are in agreement with the facts outlined in the request, they will either create a new custody order or change the existing one.

The judge has the discretion to uphold all, some, or none of the requests in the ex parte application. The emergency order will serve as a temporarily binding legal order that will remain in effect until an evidentiary hearing occurs.

If your spouse obtained ex parte child custody orders, it means that your ex brought his or her interpretation of the situation before the judge while you were not present to defend yourself.

The term ex parte also refers to coming from one side only. This means that the evidence your ex presented was credible and convincing enough to move the court to issue an emergency child custody order. Ultimately, the court determined that it was in your children's immediate best interests to do so.

The fact that the court was moved to provide the ex parte child custody order shouldn't be viewed of an actual indictment of you – instead, it is an additional protection that was issued by the court, which prefers to err on the side of safety when it comes to children. The fact is that the order is temporary, and a full evidentiary hearing is forthcoming (usually within 20 days).

While the court is loath to issue orders when one party isn't allowed to defend himself or herself, the court is willing to temporarily do so if it finds the evidence compelling and credible.

Your Day in Court

While going several weeks without seeing your children is difficult, use this time to build your best case. Custody cases can quickly devolve into he said/she said situations.

It is important to gather all evidence in support of your position. Often such evidence includes:

Carefully read what your ex is accusing you of so that you know what you are up against. Disproving a negative is notoriously difficult, but the better acquainted you are with the standing accusations, the better prepared you'll be.

In the interim between issuance of the ex parte child custody orders and your court date, stress is going to be riding high. If your ex has falsely accused you of abuse, there is little that you should put past her or him during this difficult time.

The fact is that issues related to child custody are so serious and so seriously fraught with emotion, that they can lead someone whom you thought you knew well to do things that you never would have believed.

In other words, your ex is likely operating under a tremendous amount of stress, which could lead him or her to do unpredictable things (such as obtaining an emergency child custody order in the first place).

If you need to interact with your ex during this period or if you have limited visitation with your children during this period, it is in your best interest to have a neutral third party present and to keep careful notes about anything you may need to present to the court.

Our lawyers can help you gather evidence, file the paperwork, and show you the most important facts in your claim. We understand the law and the decisions judges will typically make in ex parte issues, and will also know how to structure applications to protect your children.

Ex parte relief is not a designed to permanently remove custody privileges from a parent, but a form of aid with your child's best interests in mind. If you have a valid belief your child is in immediate danger or your spouse has plans to remove your child out of California without permission, don't hesitate to file an application for a temporary emergency order.

If you are facing an ex parte child custody order, you will need to an experienced Los Angeles family law attorney on your side. Having custody or visitation of your children suspended – even temporarily – is especially difficult.

Our dedicated legal team has the passion, commitment, and experience to help you through this ordeal. Our knowledgeable family law attorneys serve clients throughout Southern California, including the greater Los Angeles area. Contact our law firm to review the details of your case.