How Can I File for a Restraining Order in Los Angeles?

Los Angeles courts have the authority to issue an order to prohibit someone from contacting you and to keep a certain amount of distance away from you. This can be accomplished by making an application for a restraining order, which are also called a protective order or stay-away order.

These type of court orders restricts someone from making any type of contact with their alleged victim. A stay-away order normally requires the listed individual to remain a minimum of 100 yards away from the “protected person” while the order remains in place.

Protective orders that are issued by court will specifically describe what is considered acceptable contact between spouses, including children. It should be noted protective orders are typically issued with minimal allegations. If the court order is violated, it could result in an arrest and jail time. 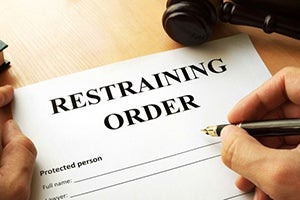 These orders will normally include specific types of behavior that are prohibited. These includes harassment, threats, stalking, communicating, and might even require the listed person to move out of their home.

The court might also award child custody to one parent if the other parent has been accused on abuse. Additionally, the restraining order might prohibit owning or possession of a firearm and could even prohibit someone from going into a school zone.

Purpose of Requesting a Restraining Order

A restraining order can be requested in a divorce case in the Los Angeles County Family Court or a separate court. A spouse will need to appear before a judge and let them know why it's necessary.

Other factors include violent behavior, such as kicking walls or throwing items during an argument, or inappropriate emotional conduct in front of the children.

Yet another factor includes behavior by one spouse making it unsafe for them to be with their children, such as drug or alcohol abuse or threats to commit suicide.

A restraining order is designed to keep a spouse separated and safe from harm. As stated, this could mean a spouse being immediately removed for their home and away from the children without any ability to return.

After the judge has been given all the information, they will decide whether to deny the request or if a temporary protection order is warranted.  It's worth noting that any request for a temporary order are rarely denied by a judge, even when there is little to no evidence to support the claims.

The court will schedule another hearing for the spouse to return on the temporary protection order in order to decide whether the order should be permanent.

In order to give readers a better understanding of orders of protection for a spouse, our Los Angeles divorce and family law attorneys will review the three main types of restraining orders in California.

You can file for a TRO if you are the victim of violence, abuse, harassment, or domestic abuse. There are no fees to file for a restraining order. These orders that are filed in Los Angeles Superior Court and normally last up to 30 days.

The primary purpose of a temporary restraining order is to give a victim protection before the judge can hold a hearing on the entire case. You can request different types of restraining orders, including:

A domestic violence restraining order are for victims of abuse by someone with whom they have personal relationship. This includes a spouse, ex-spouse, boyfriend, girlfriend, living together, or a dating relationship. It could also include relatives like grandparents, aunt, uncle, cousin, or children

These types of restraining orders apply to elderly or dependent adult victims with mental or physical limitations.  A dependent adult age can range from 18 to 64. If someone is over 65, they must be able to prove they are a victim physical or mental abuse, neglect, abandonment, or deprivation.

A permanent restraining order is typically issued after the temporary order. These types of court orders can't be issued by the judge unless there is a court hearing.

At the hearing the judge will listen to all the evidence and then make a decision on whether the victim actually needs a permanent restraining order or if there are other ways they can be provided protection from the person in question.

A permanent restraining order is not actually “permanent.” They typically last around 3 to 5 years, but can be modified based on need.

A police officer can make a request for an emergency protective order from the court as described under California Family Code 6250.

If the EPO is granted, it will only last one week. In a situation where individual listed on the EPO lives in your home, law enforcement officers can ask them to move out while the order is in effect.

An emergency protective order must be signed by the judge and can only be issued in certain situations that are described under California Family Code 6251.

Typically, a judge can be found anytime day or night in order to hear a request for an EPO from law enforcement officers. You can't request an EPO yourself, it must come from police.

In certain situations, you might be able to persuade a police officer to request a EPO on your behalf.

The primary purpose of an emergency protective order is to protect someone who will soon be making application for a temporary or permanent restraining.

There are many types of California court orders that can apply in a divorce. If you need assistance in obtaining a restraining order in Los Angeles, or need to enforce a court order while you are in the middle of a divorce, contact our law firm for help.

Our experienced attorneys can help you file and serve the necessary forms. You might be in a situation where you have been accused of violating a restraining order. Our divorce lawyers can defend you against these allegations.

We have many years of experienced working with people who seek protection and understand the process of obtaining and enforcing a restraining order.