Domestic Violence in a California Divorce

If your California divorce involves domestic violence, it is a devastating situation, and you need all the help and support that you can find. Violence is never an acceptable response to any situation, and your first priority should always be to keep yourself and your children safe.

Violence is not just described as physical abuse. Domestic violence can take the form of physical violence, forced sexual activity, verbal and emotional abuse, or even an attempt at abuse. In addition, stalking, threats, provoking fear or controlling behaviors are also forms of domestic violence. 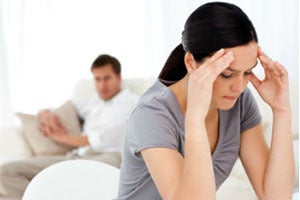 You have options to protect yourself if you are a victim of domestic abuse. You can file for a domestic violence restraining order – which is generally a no-contact order, meaning it's designed to protect you from being contacted by your spouse. It could also include stipulations about owning a firearm, temporary financial support, and could even order your spouse to move out of the family home.

If you are a victim of domestic abuse, consult with our law family law attorneys about whether a domestic violence protection order can be filed. If you believe you or your children are in immediate danger, call the police who can help you get an emergency ex-parte restraining order on the spot. Don't wait to act if you feel you are in danger because there are steps you can take to protect yourself.

If you need help, there are helplines available 24/7 that will guide you through your next best steps. You could also receive help from the Los Angeles County Department of Public Social Services. If you and your children are not in immediate danger, it's time to consult with an experienced Los Angeles divorce and family law attorney.

An Overview of Domestic Violence

Domestic violence is any kind of abuse that is perpetrated by one partner of a marriage or other kind of intimate relationship against the other partner. The California Partnership to End Domestic Violence shares several sobering statistics related to domestic violence:

Under the California Family Code, the Domestic Violence Prevention Act delineates exactly what constitutes an act of domestic violence, and this includes a wide range of abuses:

Under California law, any of these can be grounds for prosecution.

When it comes to divorce, California is a no-fault state, which means that divorces are based on irreconcilable differences and not on the fault shouldered by either spouse. There are, however, some exceptions to this rule – where fault can play a role – and a domestic violence conviction is one of them.

If, within the last five years, your spouse was convicted of domestic abuse against you, the court makes a presumption that they are not entitled to receive spousal support (often called alimony). This legal presumption is not the end of the story, however. Instead, it is rebuttable, which means that your spouse can rebut the presumption levied against him or her.

In a California divorce, community property – property that you and/or your spouse acquired during the course of your marriage – is generally divided equally between the divorcing spouses.

Again, however, a conviction of domestic abuse can also serve as an exception to this rule. If the court determines that the violence in question likely played a significant role in the dissolution of the marriage, it can weigh the conviction against the perpetrator in the division of community property.

Further, if the domestic abuse perpetrated against the victim resulted in a disproportionate depletion of community assets, the judge can help offset the victim's losses in the division of marital property.

If There Is No Domestic Violence Conviction

If you are the victim of abuse, you know how terrifying and isolating that can be. There is still a considerable stigma associated with domestic violence, and the fact is that many perpetrators of such violence go unpunished.

If your spouse has never been convicted of domestic violence, it can open your case up to considerable vulnerabilities. Once you voice your claim of domestic abuse in court, there is nothing stopping your abusive partner from retaliating.

If you are the victim of domestic abuse and your spouse has no conviction, working closely with a dedicated family law attorney with experience bringing complicated domestic violence cases is in you and your children's best interests.

Without a conviction against your spouse on your side, you and your attorney will need to work closely together to build a strong case that delineates the abuse you've suffered and that leaves no space for your spouse to baselessly retaliate.

If you are the victim of domestic abuse, consult with our Los Angeles divorce attorneys. Divorce is always difficult, but if you are the victim of abuse, you need experienced legal guidance now. Our dedicated and compassionate divorce and family law attorneys at faithfully serve clients throughout Southern California, including the greater Los Angeles area and the San Fernando Valley.

We are committed to protecting you and your rights and to aggressively advocating for your case's best possible resolution. To schedule a free consultation, contact us at 818-528-3471.