If you're going through a divorce in Los Angeles County, or plan on getting one in the near future, you should explore all of your options. There are a range of alternate solutions that will give you more control over how your divorce proceeds, including divorce arbitration. It's important to note this process is not the same as going to a family law court. It's less formal than a court setting but more formal than divorce mediation. 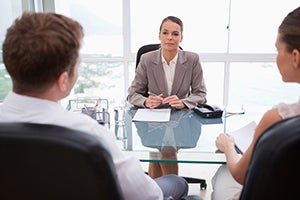 Divorce arbitration in Los Angeles County is actually conducted behind closed doors, meaning it's not the typical public gathering in court. Arbitration is less expensive and can be an excellent option to avoid a costly legal battle in front of a judge and it also keeps the specific details of your separation private.

When divorcing couples can't agree on all the details of their divorce, they need a judge to step in and decide the dispute for them. This often happens in the context of deciding who gets child custody or whether one spouse should receive alimony. Arbitration is an alternative to going into court.

Instead of having a judge decide the dispute, you can ask a person acting as an arbitrator to decide it. Arbitration is binding because each side must agree to arbitrate in the first place. No one can force you to arbitrate.  Arbitration has some advantages and disadvantages, which you should thoroughly consider with a Los Angeles divorce lawyer before signing up.

Some of the main advantages to Arbitration over traditional divorce proceedings include the less expensive price tag, a faster divorce process, complete privacy and discretion with no public records, and the opportunity to negotiate which often leads to better results. Let's take a closer look below.

In basic terms arbitration is an alternative dispute resolution method. Rather than going to a Los Angeles family law court to formally litigate your divorce at a formal hearing, you and your spouse will make an agreement to resolve the issues of your divorce in a private hearing.

The hearing is similar to what you would normally find in the courtroom where both spouses provide an oral argument and present evidence before a neutral judge. However, instead of a sitting judge, the hearing is held before a neutral arbitrator, who is typically a former judge or a retired lawyer familiar with California family law and procedure.

In many ways, arbitration is like a court trial. You present evidence to a divorce arbitrator, who has experience in family law. As stated, in many cases, divorce arbitrators worked as family court judges before retiring from the bench.

Evidence can take many forms, including documents and witness testimony. Each side can also cross-examine the other side's witnesses, just as they would at a trial. Each spouse is allowed to be represented by an attorney who can handle the presentation of evidence and make a closing statement to the arbitrator.

Arbitration is often less formal than a trial, and the couple does not need to use all the California Rules of Evidence. At the end of the hearing, the judge will render a decision, and typically a court upholds the decision when it awards a divorce.

Why Should I Choose Arbitration to Resolve my Divorce?

Let's face it, getting divorced if often complicated, stressful, and the normal process will divide a once closely bonded single family group into separate fighting groups. Critical life-altering decisions dealing with child custody, child support, spousal support, asset and property division have to be made before a divorce is legally finalized. It's no surprise that most divorcing spouses will normally have far different opinions about final specific divorce details.

When spouses can't reach a mutual agreement, a family law judge is forced to evaluate all the evidence and testimony in order to make a decision for them.  Attending court hearings where a judge decides your future is an unsettling process for anyone who wants to have control over their own life. Arbitration is the option that gives a spouse an opportunity to maintain control over the specific terms of their divorce.

As discussed above, the arbitrator has the authority to make final unilateral and binding decisions over the divorce. However, spouses do have the ability to find and assign the actual arbitrator who will make these decisions. Spouses also have the ability to set some ground rules that might help resolve some divorce issues, while going to family court has no such flexibility.

Why would someone choose to use arbitration instead of going into court? There are some more familiar reasons:

Many people successfully go through arbitration and are happy with the results.

There are some negatives you should also be aware of:

Although arbitration is often less formal than a trial, it is still an adversary proceeding. There is usually a winner and a loser, which can contribute to hurt feelings and make co-parenting difficult later. Instead of arbitration, you should also consider resolving your dispute amicably with mediation, which is a type of guided negotiation that is also completely voluntary.

Once a divorce is finalized, each spouse can go their separate way. However, if they have children together, then there will need to be continuing contact—and usually conflict. At our law firm, we have seen divorce couples disagree about all sorts of issues, including whether one parent can relocate or whether to increase visitation. Arbitration is often an effective method of resolving these disputes as well.

If you are interested in keeping your divorce private, less expensive, and minimizing the impact on your children, then divorce arbitration is a good choice. If you have reached an impasse in your divorce, you should get creative about how to finally resolve your disputes. Divorce arbitration might be exactly what you need to break the logjam and finally get your divorce decree. You might want to purse a collaborative divorce, which is a process of resolving your differences out of court.

You can learn more about arbitration from our Los Angeles divorce and family law lawyers. We have experience with divorce arbitration, and are prepared to defend your rights in front of the arbitrator. For help, contact our office. We offer a free initial consultation where we can discuss the specifics of your case. Contact us at 818-528-3471 or fill out our online contact sheet.