Will I Get Deported Because of My Divorce From a U.S. Citizen? 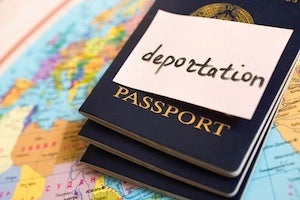 As if divorce weren't a sufficiently difficult and complicated time in your life, for many people, that difficulty is exacerbated by the impact of divorce upon their immigration status. For non-citizens who are legally in the United States but are divorcing their U.S.-citizen spouse, that divorce can raise many questions about their ability to remain in the United States after the termination of that marriage.

The problem is not uncommon.  The Center for Immigration Studies has estimated that about 400,000 United States citizens marry foreign citizens every year. In most cases, that marriage forms the basis for the foreign-born spouse's efforts to obtain a “green card,” or permanent resident status.

The sponsorship of their U.S.-citizen spouse is the basis for their application for permanent resident status. That basis can disappear in the event of divorce, potentially throwing their case for U.S. permanent residence into limbo. U.S. Citizenship and Immigration Services (USCIS) believes a substantial number of immigrant marriages are fraudulent and entered into the country for the specific purpose of obtaining U.S. residence.

Both United States law and USCIS policy have several safeguards and requirements to ensure that only immigrants who have entered into real, valid marriages are rewarded with immigration benefits in the United States.  In some cases, couples who enter into fraudulent marriages are not able to sustain artificial lifestyle for as long as it takes to get a green card, and the marriage ends in divorce.

In basic terms, if you sponsored a non-citizen for a permanent residence in the United States, their immigration status will depend on their marriage to you.  This does not to say that that divorcing them will result in deportation or any unfavorable immigration consequences.

It's important to note that U.S. immigration law requires that any marriage used as a basis to sponsor a non-citizen for permanent residence must have been entered into in “good faith,” regardless if the marriage eventually ended in divorce.

In simple terms, a good faith marriage is defined as a marriage not entered into solely for the specific purpose of obtaining immigration benefits. If you are planning a divorce from your non-citizen spouse, call a Los Angeles divorce lawyer at Furman & Zavatsky LLP to review the details. Now that we have covered a basic overview of any immigration consequences of a divorce, let's take a closer look below.

What are the Consequences of Divorce on Immigration Status?

If you are married to a U.S. citizen but are getting a divorce, it is possible that the divorce will have some impact on your application to become a permanent resident. However, it is not a given that you will be rejected simply because you are getting divorced.

Obviously, without a sponsor who is a U.S. citizen, it is possible that an application for permanent residency will be denied. However, when losing your sponsor because of divorce, the situation becomes more complicated.

Most foreign-born spouses of U.S. citizens who are getting divorced actually are given conditional permanent resident status if they do not withdraw their immigration application.

They simply file an application for a waiver. In general, an immigrant who marries a U.S. citizen is given conditional permanent resident status until the couple has been married for two years.

Apply for Waiver of Termination

Even without following that path, while you can no longer obtain a green card based on marriage if you are in the process of getting divorced you can apply for a waiver of termination if the marriage was in good faith. Such a waiver can allow you to continue your pursuit of permanent resident status. To qualify for such a waiver, though, you must provide certain evidence, including:

You still will have to provide evidence that your marriage was in good faith. If you have obtained an unconditional green card – permanent resident status – before your divorce, then the only impact of the divorce on your immigration status is a possible delay in obtaining citizenship.

Facing a Divorce That Could Affect Your Immigration Status? Contact the Attorneys of Furman & Zavatsky

If you are getting divorced in the Los Angeles area and your case could affect your immigration status and your ability to stay in the United States legally, contact the Los Angeles divorce attorneys of Furman & Zavatsky for help. Call us at (818) 528-3471 or contact us through our online contact form. We can help, and you shouldn't face this alone.