Child custody is often the most contentious aspect of a divorce. When a couple that has been raising a child together decides to end their marriage and live separately, it makes it impossible for them to continue parenting as they were. 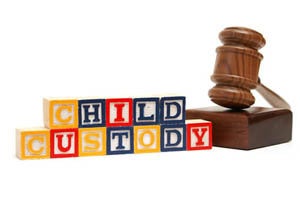 The law recognizes that both parents have rights and responsibilities with respect to their children, however, so an arrangement needs to be made that allows both parents to exercise those rights as long as it is in the best interest of the child to do so.

Either type of custody can be joint (i.e. shared) or sole. Full custody is often a term parents use when referring to the legal term of sole custody, but this comes in different forms. When one parent has sole physical custody of a child, the other parent will normally be permitted reasonable visitation rights. In some cases, the judge could order supervised child visitation.

When parents can agree upon child custody arrangements, their agreements are normally memorialized into a binding Child Custody and Visitation Order, which, once signed by a judge, becomes a legally enforceable court order.

If parents cannot agree on child custody and visitation arrangements, a California family court judge will make the decision based upon the best interests of the child or children involved. You need to understand your parental visitation rights. California gives some protection for grandparents who want to make sure they are able to keep in contact with their grandchildren in the future.

If the parents don't live in the same country, and the child routinely resides with both parents, It's often difficult to determine which country should have jurisdiction. International child custody cases often become a complicated dispute.

As children grow older, their needs and interests oftentimes change, and child custody and visitation arrangements may need to be modified. If you are seeking a modification of an existing Child Custody and Visitation Order, an experienced Los Angeles child custody modification attorney at our law firm are here to help.

The basis for modifying an existing Child Custody and Visitation Order is whether or not a ‘material change in circumstances' has occurred.

If the parties can agree upon the child custody and visitation modifications, they are free to enter into a stipulation which is then signed by a family court judge. This stipulation essentially becomes the new, legally enforceable Child Custody and Visitation Order. See related: How to Get More Visitation Time with Your Child.

However, if the parties cannot agree on how to modify the existing child custody and visitation arrangements, the court will decide. In reaching a decision about ‘material changes in circumstance,' family court judges consider the following non-exclusive list of factors:

If the parents cannot agree on how to modify an existing Child Custody and Visitation Order, one of the parents must ordinarily file a Motion to Modify with the appropriate California family court. See our blog:  Child Move Away Cases in California

It is important to understand that judges have significant discretion when deciding whether to modify an existing child custody order. For this reason, it is important to retain legal counsel if you are involved in a dispute regarding an existing order, whether you are the party trying to modify the order tor the party opposed to the modification. Some of the ways that a lawyer can help include the following:

The needs of families and children inevitably change over time, and child custody and visitation modifications are oftentimes necessary and appropriate for a variety of reasons. If you need to fight an ex parte child custody order filed against you, call our law firm to for assistance.

Our experienced Los Angeles child custody modification attorneys will be able to speak with you about your family's circumstances, review all of the facts and circumstances of your case with you, and assist you with taking the necessary legal actions to modify an existing Child Custody and Visitation Order. To schedule a free consultation with one of our Los Angeles child custody modification attorney, call the law office of Furman & Zavatsky today at 818-528-3471