Can Text Messages Be Used in Divorce Court?

Most families enjoy the convenience of communicating with their spouse or children instantly with technology. Regardless of location, you can easily send text or direct messages from your social media accounts. 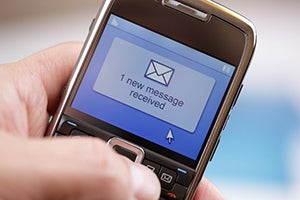 If the relationship ends, these text messages could show up in divorce proceedings as incriminating evidence against the spouse in order for the other spouse to be awarded martial or to win a bitter child custody battle.

Text messages have become a common form of evidence during California divorce proceedings. However, when using text messages as evidence in a divorce court, not all messages are considered equal.

This means spouses who are getting divorced need to understand what type of messages could be used to their advantage during the divorce process.

To give readers a better understanding about the use of text messages or emails in a California divorce, our Los Angeles family law attorneys are providing an overview below.

Are the Texts Relevant?

The court does not care about fault or why the relationship ended. The last thing you want to do is appear to waste the court's time out of spite. However, there are many valid reasons for submitting text messages during divorce proceedings. You may want to provide evidence that your spouse:

All of these issues and more can affect child custody, restraining orders, and even the separation of assets. Your Los Angeles family law attorney can help you determine if the content of the messages are relevant to the overall case.

Were the Messages Obtained Legally?

Any electronic messages used as evidence in a California divorce court must be authenticated. This means it must be proven their spouse sent the text messages.

Receiving authentication could come in the form of getting your spouse to admit they created and sent the messages, but the court might allow a third-party eyewitness.

If your spouse sent the text messages to your phone, the messages are fair game for divorce proceedings. Furthermore, if the evidence exists on a shared device, you can typically use them as well. In some cases, you may go through a legal process to obtain messages on your spouse's personal devices.

However, you should never hack into your spouse's device or steal passwords in order to collect this evidence. Not only will the messages be inadmissible, but attempting to submit stolen messages may reflect poorly on you.

Were the Texts Sent from Your Spouse?

If the text messages came from your spouse to you, nobody else needs to take the stand in order to present the evidence. However, you could also get incriminating texts from other people in your lives.

For example, if your ex-spouse's new partner sends incriminating messages, you may need to subpoena the person who sent the messages. Generally, if you have text messages from your spouse, they can be used as evidence during your divorce.

Some common examples why text messages between spouses can be relevant to divorce proceedings include proving one spouse is having an affair or attempting to hide assets. They are also commonly used to prove your spouse has not been honest with the court on a variety of issues during the divorce process.

Are the Messages Authenticated?

As such, California law requires text messages to be authenticated before being admitted to court.

Several California laws dictate how electronic communications can be authenticated. Below are the evidence code numbers and examples of when they may apply:

By looking at your texts, your attorney can let you know how you can authenticate the messages.

How Do You Come Across in the Texts?

There are at least two sides to every divorce. When reading the text messages in question, it may be clear to you that the other person is in the wrong.

However, it's important to take a step back and consider what others may think of the messages you sent during the conversation.

The truth is that all people can get heated sometimes, especially in the middle of a contentious divorce. While it may be understandable if you lost your temper, presenting those texts in court may hurt your case more than help it.

This is another case in which the help of an expert attorney can help, as they see these judges often and may have seen similar cases before.

California divorce proceedings are typically stressful and time-consuming, especially if they involve child custody hearings or a large amount of marital assets to divide between the spouses.

You should always seek the advice of an experienced attorney who handles family law matters in the state of California. Our Los Angeles divorce and family law attorneys help spouses throughout Southern California with their legal issues.

If you need more information about using your spouse's text messages during your divorce, call our office to review the details and legal options. If you are unsure about any part of the divorce process in California, be sure to hire experienced Los Angeles family law attorneys.